Some Little Bit$ (coins) Have Gone a Long Way 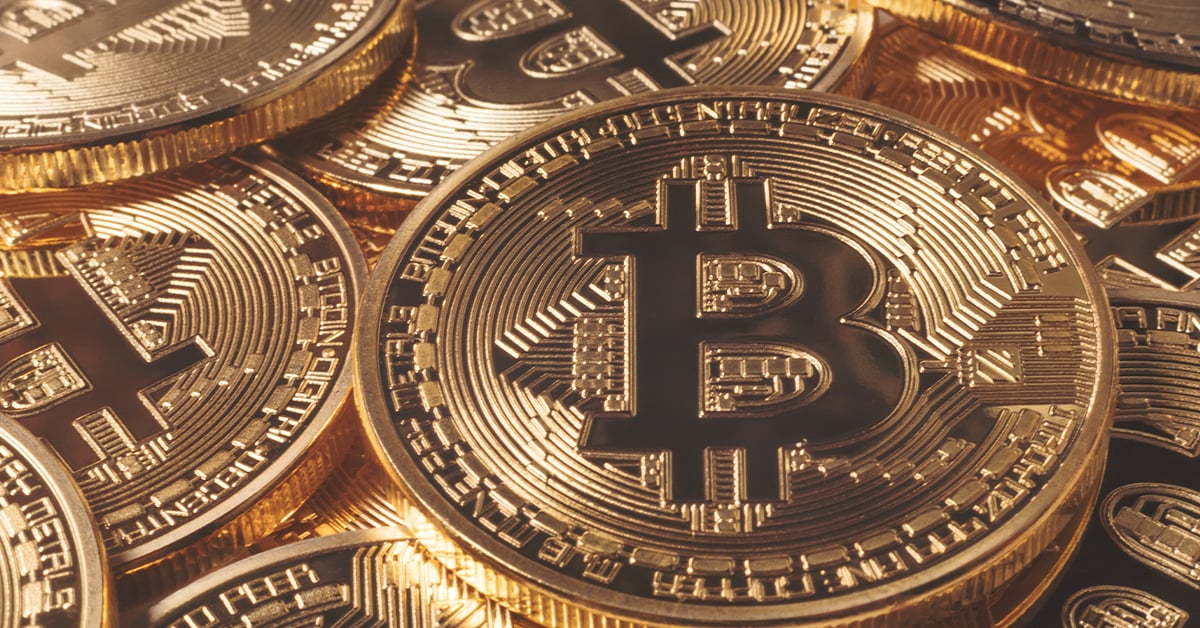 More difficult than writing this article was coming up with an appropriate title.  So many puns came to mind: “If Bit$ and Buts Were Candy and Nuts”… “Flash in the Pan or Too Big to Fail”… “A Little Bit$ or a Big But?”…You get the picture!

Over the course of the last few months we have fielded more questions about Bitcoin than we have any other topic.  Even though it is one of the most popularly used words during investment conversations and is front and center on the likes of CNBC, there still seems to be a lot of questions surrounding this highly popular topic.

So What is Bitcoin?

Business Insider explains Bitcoin as a type of cryptocurrency often referred to as decentralized money.  Decentralized means it is created, processed, and stored outside the scope of a central bank or government. It has no physical form or element to it.  In its essence, it is really “just” a set of data secured by the science of encoding and decoding information, also known as cryptography (hence the term “cryptocurrency”).  This complex process eliminates the possibilities of counterfeiting which serves to reinforce the security of using cryptocurrency to pay for goods and services.1

Although there are several thousand cryptocurrencies, Bitcoin is currently the most widely adopted manifestation of this digital revolution.  It was formally launched in January 2009 by Satoshi Nakamoto (a still unknown, anonymous individual or entity), and was viewed by early adopters as simply a method of peer to peer payment.  However, there are some archives of Mr. Nakamoto’s early communications suggesting his vision for its value is much like how Bitcoin is being used today.

Many people still don’t understand Bitcoin, and most of us surely don’t fully grasp the technology behind it.  Some skeptics will even argue that Bitcoin is nothing but a faddish bubble ready to pop, akin to the Dutch tulip craze in the 1600’s.

As shown in the charts 1-3 below, there have been 3 full market cycles in Bitcoin’s brief history, each with significant growth followed by a massive drawdown.  As 4th chart shows, Bitcoin’s price, like virtually all asset classes except for cash and treasuries, plummeted in March 2020.  Like many other assets, Bitcoin has since experienced a significant rally which is still intact as of this writing.

“Faddish bubbles” don’t continue bouncing back and making new highs with new cycles, so for many investors this feels like more than just a flash in the pan.  When viewed from the perspective of a longer time frame, like all investments should be, the trend of Bitcoin’s price has been up and to the right (that means it’s produced a positive return so far)! 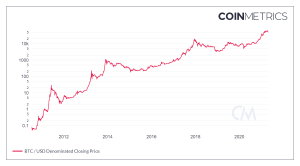 According to Dan Held of Kraken, there was a division amongst big players in the Bitcoin movement just several years ago.  One narrative was that Bitcoin needed to be marketed/managed as a funding source to pay for everyday goods and services, and to compete with companies such as PayPal.  Proponents of this “currency driven” narrative eventually created Bitcoin Cash.

What might seem counterintuitive is that the higher the price has gone, the more widely it has gained credibility.  The increase in price/credibility could very well be the catalyst which serves to stabilize Bitcoin’s price at higher levels.

Just in the last 6 months, Tesla has begun holding Bitcoin on its balance sheet, and alongside PayPal, will accept it as form of payment.   Several large financial institutions have embraced it by way of adding it to their holdings.  While some adopters continue to talk about Bitcoin as a currency, the historical extreme volatile nature and limited ability to trade for goods and services at this time leads us to believe the term currency is still premature.

Other big players within the Bitcoin movement took a different angle than the currency narrative, and saw Bitcoin as a store of value, or gold 2.0. To understand the “store of value” argument, and possibly even much higher prices for Bitcoin, it is important to understand its supply and potential demand relationship.

Bitcoin Has a Supply Cap

While central banks and governments across the globe seem destined to continue printing money (increasing the supply thus debasing its value) and issuing debt, there is a limited supply of Bitcoin.  Only 21 million Bitcoin will ever be created.  This finite supply gives Bitcoin a potential scarcity value, something that neither fiat currencies nor gold have.

To date, approximately 18.7 million Bitcoin have been created (mined).  The remaining 2.3 million coins are scheduled to be mined over the next 119 years or so with fewer and fewer coins mined with time.  The chart below illustrates the declining supply/growth curve. 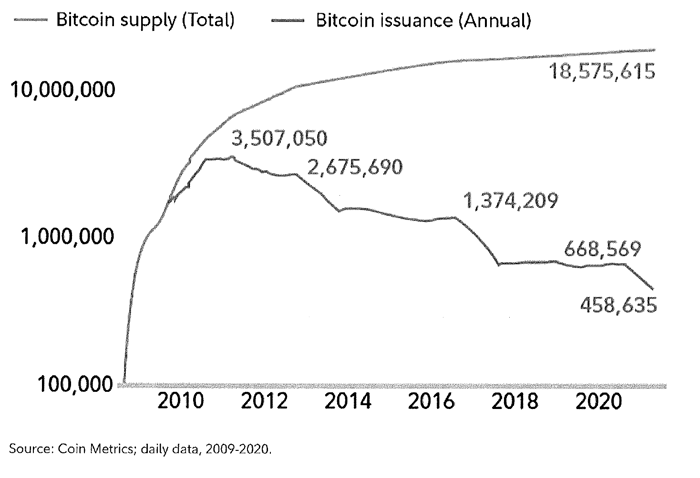 Jurien Timmer, Director of Global Macro at Fidelity, recently wrote in a white paper “Price is at the intersection of supply and demand, and demand is growing exponentially while supply approaches its limit…..Bitcoin can act as a store of value because of its scarcity, but it’s also an integral part of a technological revolution (blockchain encryption) with potentially explosive demand growth.” 2

Coupled with demand that is possibly in its early stages of growth, the slowdown in mining additional coins is the single best argument we can find for viewing Bitcoin as a sustainable store of value, hedge against geopolitical risks, and/or protection against monetary inflation/hyperinflation.

People reluctant to change will also argue that Bitcoin (like gold) doesn’t actually create anything of value in the traditional sense.  You can’t eat it, sleep on it, touch or feel it, nor does it pay a dividend.

But what started out as twinkle in someone’s eye soon morphed into a social experiment which became a medium of exchange in the black market in its earlier days.  Now, Bitcoin is popular for venture capital funds, and may be on the cusp of achieving critical mass acceptance as several large financial firms such as Fidelity have filed for an Exchange Traded Fund with the SEC.

Even though it’s popularity is growing, the price of Bitcoin could continue to experience big swings even if the trend remains higher.  Some of the risks to the price of Bitcoin itself seem to be an uncertain regulatory environment, onerous taxation, an unpredictable social movement away from it, and competition from other crypto or national currencies.

We would encourage investors to always have an open mind about new and disruptive services/technologies.  After all, skeptics had their reservations about companies such as Amazon when it was newer and trading for $150 per share, then $750/$1750/$2500 and beyond.  Now, many households can’t live without Amazon, and hold its shares directly or indirectly in their portfolios.

We don’t know if Bitcoin will become the next “Amazon”, but we do know that all investments come with different risks.  As with any investment, it is imperative that investors do their research and make prudent asset allocation decisions given their specific situation.

HoganTaylor Wealth provides an integrated approach to investment and financial planning and is a registered investment advisor and subsidiary of HoganTaylor LLP. HoganTaylor Wealth takes its fiduciary responsibility seriously. Without commission, referral or soft-dollar arrangements, they operate on a fee-only basis to ensure everyone’s interests are aligned with those of the client.

INFORMATIONAL PURPOSE ONLY. This content is for informational purposes only. This content does not constitute professional advice and should not be relied upon by you or any third party, including to operate or promote your business, secure financing or capital in any form, obtain any regulatory or governmental approvals, or otherwise be used in connection with procuring services or other benefits from any entity. Before making any decision or taking any action, you should consult with professional advisors.

This material is not intended to be relied upon as a forecast, research or investment advice, and is not a recommendation, offer or solicitation to buy or sell any securities or to adopt any investment strategy. The opinions expressed are as of 10/30/2020, and may change as subsequent conditions vary. The information and opinions contained in this material are derived from proprietary and nonproprietary sources deemed by BlackRock to be reliable, are not necessarily all-inclusive and are not guaranteed as to accuracy. Past performance is no guarantee of future results. There is no guarantee that any forecasts made will come to pass. Reliance upon information in this material is at the sole discretion of the reader.